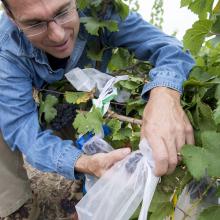 I work on economically important pests, with the aim to provide environmentally sustainable and minimal impact pest management strategies for agriculturalists. Multiple techniques are used in a whole-system approach to obtain sustainable means of production.

In order to obtain this goal, new knowledge obtained from detailed insect physiological, biological, behavioral, ecological and environmental studies are needed. This knowledge is then used to apply treatments timed to occur during periods when pests are at their most vulnerable. These control strategies have historically focused on biological control, mating disruption and conventional synthetic pesticides.

·Ranked in the top 1% worldwide, Web of Science for 2019, 2020, and 2021.  He was named among the world's most influential and Highly Cited Researchers during this period.

· Educational Institution and Federal Laboratory Partnership Award” 2011-2016 on the StopBMSB project funded by the SCRI program, 2017.

· South African Society of Enology and Viticulture Scientist Award for most outstanding scientific contribution published in our journal or the most outstanding innovation in our industry, 1999.